Join historical storyteller Lynn Rymarz to hear the fascinating story of Hedy Lamarr. Discover how from her early beginnings growing up in Austria she had dreams of becoming a movie star. It was Lamarr’s beauty that took center stage when she was young. After escaping an unhappy marriage in Austria, she was introduced to Louis B. Mayer of MGM Studios while he was in London. He gave her a new last name and whisked her away to Hollywood, where she entertained audiences on the big screen in 28 movies, including Samson and Delilah. She also had a good mind, experimenting on new inventions. She went on to patent an invention known as frequency hopping communication system during WWII, that is credited as the predecessor to Wi-Fi, GPS, and Bluetooth. Howard Hughes called her “a genius.”

Speaker Bio: Lyn Rymarz
Lynn Rymarz has entertained audiences with her portrayals of historical women since 2005. As a children’s author and storyteller, she enjoys sharing little-known historical stories. Such stories have been published in the children’s magazines Cricket and Highlights. Her performances told in the first person have included Mary Lincoln, Martha Washington, Susan B. Anthony, Mary Surratt, Nellie Bly, and The Unsinkable Margaret Brown. 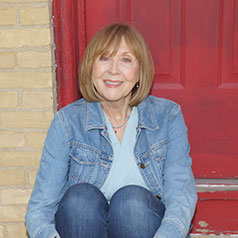